Day 9: The most believable relationship.

WARNING-Mention of incest shipping behind the cut!

tw100 Challenge #180-Dancing. Takes place during the wedding scene in Something Borrowed. Thanks to

Hubby and I went to brunch on Saturday at Chow and I ate....oh god....I'm in hell. I ate a cup of cottage cheese and 1/2 grapefruit.

We sold a bunch of DVDs and CD's to Amoeba records for cash and bought a few DVDs for "Cheesy Horror Movie" night. I did some shopping at Safeway and came home for yet more laundry. The laundry ordeal is possibly coming to an end, but that'll go in the locked post.

The Cheesy Horror Movie night consisted of Suck, which was awesome and Slither, which was not so much.

Suck-how can you not love a rock and roll vampire that has Iggy Pop, Henry Rollins and Alice Cooper PLUS Malcolm MacDowell as the "Van Helsing" figure? Seriously campy fun all around. Highly recommended.

Slither-serious night-mare fuel for me. Creepy, slithery, slimy things that get in your body and BREED? EWWWWWWW!!!! On the other hand, the extras make it look like way more fun was had making the movie than watching it.

We also started Angel, Season One, because I'm tired of people on Buffy (we're up to Season 6) referencing things that happened on Angel which I haven't seen. I dig the premise, and I do love Cordy. I still feel bad for David Boreanz having to keep up the broody vampire thing. (I still think he must thank his creator and/or agent every day that he gets to work on Bones and not have to do that angsty stuff. Yes, I know how funny/hypocritical I sound saying that.)

Fringe, Season 1, disk two. I'm still not warming up to it. There's no really good identification figure and it's veering a bit too much into Twin Peaks weird for the sake of weirdness territory. 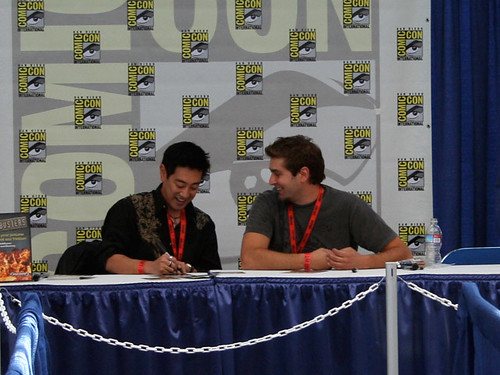